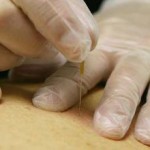 A useful way to learn about and understand a technique such as trigger point dry needling is to read through some case examples. This can allow you to get an idea as to whether dry needling could help you. Following are two actual case examples of patients treated in our clinic with a description of how needling is blended into other manual physical therapy treatment.

The first patient is a 38 year old Ironman distance female triathlete. She came to the clinic complaining of right upper hamstring (back of the thigh) pain that occurred if she tried to run faster at or near a shorter race pace, or if she ran hills. Cycling was painless, as was swimming. She also complained of pain while 10 minutes of driving her car. She could reproduce the pain in standing by putting her foot on a chair and contracting her hamstring. The pain had been present at varying levels for 9 months. She had previous treatment that included soft tissue mobilization of her thigh and hip area and had been consistent with stretching her hamstrings. Our evaluation (which includes both watching and feeling body movements and feeling with our hands the consistency of joint and muscle/tissue movement) revealed limited elasticity with trying to lengthen or stretch her hamstrings and hip muscles, as well as limited hip joint mobility. A common finding of coccyx (tailbone) stiffness was present that many practitioners do not check or treat. Read more about coccygeal dysfunction in a blog post that is to come! This athlete was seen twice per week for 2 weeks, then another 5 visits over the next 8 weeks. Manual mobilization techniques were applied to restore motion to her hip and coccyx. Three of her sessions included trigger point needling to her hamstring in 3 places, and three other hip muscles (gluteus maximus, gluteus minimus, and piriformis). Superficial to deeper soft tissue mobilization was applied to these same areas. Her stretching was changed to a more gentle, active, non-weight bearing method, but key was doing a single leg balance/strengthening drill to restore a more normal push off during gait/running. Her pain was 50% better after the first session, 80% better after the fourth session (2 weeks from initial), and running and sitting pain free by her last session.

The second patient is a 28 year old female dental hygienist complaining of left neck and shoulder blade pain with tingling and numbness into her left hand. She also had headaches nearly every day in the back of her head with some pain behind her left eye. Symptoms were worse by the middle of the week and a little better after a few days off of work, but had been present for over a year. She researched exercises and self treatment with acupressure via the internet and was able to reduce her symptoms slightly and temporarily. Her symptoms caused rapid fatigue through her work day and she did not have the energy to exercise for months prior. Symptoms also increased if she tried to strength train at her gym and recently walking for exercise had started to increase her neck pain and headaches. Treatment at other clinics included manipulation and adjustments around her neck and upper back which either hurt, or did not help. Evaluation of her posture and work related movements revealed habitual stress patterns placing extra strain on her upper back, shoulders, and neck. With our manual evaluation we could feel “knots” and inelasticity in specific areas around her head, neck, shoulders and upper back. She had multiple “trigger points” which are tight bands palpable in these areas and manual pressure reproduced many of the symptoms she was complaining of. She was seen twice per week for the first week, then once per week for 2 more sessions. Treatment started with manual joint and soft tissue mobilization (very specific and localized stretching with our hands) and trigger point needling in the tender muscles of her head, neck, shoulders, and upper back. She was taught exercise to be done frequently throughout her workday for posture awareness and stretching exercises to improve alignment. After only 4 sessions in 3 weeks she had not had a headache, was sleeping better with more energy through the day, and had actually increased her work hours. Her neck pain and arm numbness were present on and off, but she was able to check her posture or do a few simple quick exercises and keep the symptoms under her control.

Questions? Email us at info@bmechanics.com or give us a call (262-695-3057) if you would like to make an appointment or speak to a physical therapist.